After almost six months of my traineeship at the political department of Lufthansa Group (LHG) in Brussels, I can look back upon interesting takeaways. I was able to develop personally through many new contacts as well as through countless exciting events. Especially the current development and change in Brussels after the European elections and before the Brexit and the reconstitution of the European Commission are fascinating to see. This is exactly what makes working in Brussels so interesting. Not only Brussels itself is changing, but Brussels also changes relationships. You have to understand this special kind of city if you want to get closer to the question of this blog. Ryanair and easyJet, for example, are two of our toughest competitors in public, but here in Brussels we often work trustingly together. I will now explain this phenomenon in more detail.

As I mentioned in my previous blog – you can read my first impressions about LHG’s EU lobbying in my post from April 2019 -, LHG is part of Airlines for Europe (A4E). Almost all European carriers are represented in this airline association. The five largest airlines after passenger transport are LHG, Ryanair, IAG (British Airways, Iberia, Vueling etc.), Air France/KLM and easyJet. Together they transport almost 600 million passengers per year. Among other airlines, also Norwegian, TAP and Finnair are members of A4E. Why am I telling this? A4E is, so to speak, one of the most important interfaces, where the airlines mentioned above become productive allies rather than fierce competitors. This is done for comprehensive and industry-wide issues. In various working groups, joint position papers on topics such as passenger rights, airport charges, taxes and ownership & control are drawn up and addressed to the European institutions. 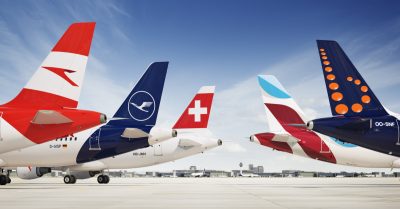 On 10 July for example, A4E held a press conference on the latest air traffic delays and argued against new “environmental” taxes on aviation. Around 30 journalists and two TV crews attended the event. On behalf of LHG, the CEO of Brussels Airlines, Christina Förster, was present. Before and after the conference, I could also speak freely with her about my experiences at LHG and about my private future. At the end of our short conversation she said that I could contact her at any time. It surprised me how approachable and “normal” she was, even though she is CEO!

Furthermore, A4E presented during the press conference updated figures showing structural air traffic control issues remained at the heart of delays, and implementation of the long-overdue Single European Sky would help save a significant amount of CO2 emissions. A4E also announced new aggregated figures showing A4E airlines’ total environmental tax contributions in 2018 and 2019, as well as total investments in new aircraft purchases and green technologies until 2030 for all European carriers. Furthermore, even when it comes to competitive airlines from outside Europe, LHG, Ryanair etc. are pulling in the same direction.

After the press conference, a barbecue in the garden of our office building was organised. A4E had invited all important aviation stakeholders. It was thrilling to see how the relaxed atmosphere spread among everyone, whether European or non-European airline or association. For example, I had a longer talk with the Head of Public Affairs of Qatar Airways. With his German background, we could have an interesting discussion about work and private life in Brussels. After dinner, I was in a group with various people, including Michael O’Leary (CEO of Ryanair) and Willie Walsh (CEO of IAG). I can’t believe how close I got to them! One could almost think that the aviation industry in Brussels is neither competitors nor colleagues…more like brothers and sisters!

Concluding my internship at LHG, it has been a wonderful experience where I got to know the interplay between both Lufthansa Group and the EU. After my master studies I will definitely try to come back to LHG or Brussels. If I have made you curious about the traineeship now, look at the Be-Lufthansa page and apply! Maybe next year you’ll get the chance to gain similar experiences as I did….

Take care of yourselves and stay with LHG!

A tour through the Bremen flight school