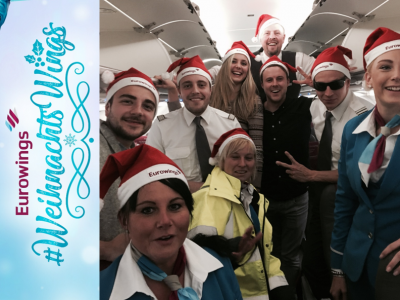 “Let’s surprise Eurowings passengers by letting them fly for free for Christmas!” This is what I, a SWISS ProTeamer, suggested to some Eurowings managers in July 2017. Already since the application period for the ProTeam program, I had this idea of surprising passengers with free flights.

“Where and when do we exactly surprise the passengers? Who and how many get surprised? What is the story line behind it? How do you make it spectacular enough as a promotion? Is it realistic setting up and carrying out a Christmas promotion from scratch within 1 month – and that as a SWISS employee with one week of Eurowings experience?” These were only some of the questions, I was asked when I arrived in Cologne in November 2017 and went to the commercial board.

So, I had to turn my idea into a concrete concept. Running through the Eurowings building talking to probably every department, writing e-mails and calling other organizations such as LSG Skychefs, gave me an overview of all stakeholders and restrictions this promotion would have. Even more important I could create a small task group of people supporting my idea. Finally, we came up with a rough concept, which got funded in mid-November:

The remaining month until Christmas would demonstrate the complexity of airline operations and project management to me:

From the definition of the selected flights until the transportation of the flight vouchers on and off board again – every detail had to be meticulously defined and organized: Catering, decoration,… Thanks to the open-mindedness and hands-on mentality at Eurowings, I am proud that Weihnachtswings successfully surprised 1’100 passengers on 7 flights involving 11 airports in 5 countries. The following link shows the result in a promotional video:

I am very grateful for the confidence that Eurowings placed in me, by giving me the opportunity to manage a project from the initial idea until the actual execution. The familial atmosphere and especially the positive attitude, always looking for a solution instead of focusing on obstacles impressed me. Don’t ask why something might not work? Rather ask what is needed to make it work?

Lufthansa and other airlines: competitors or colleagues?

Right out of Theory Class at Flight School: What is Radio Navigation?